What is Ethernet Transport

Also known as Carrier Ethernet or Private Line Transport, Ethernet Transport is usually used to provide a physical connection to a local area network (LAN). Transport is different from IP transit. Ethernet transport does not necessarily mean a connection to the Internet at large. It is a way to connect two points using layer 2 of the OSI model.

Ethernet consists of Layer 1 and Layer 2 technologies. This is the physical layer (fiber, copper, etc.) and the data link layer (frames, media access control, etc.). Ethernet transport does not extend into Layer 3, which is the IP layer.

At the same time, Ethernet transport is different from your local area network (which might also only operate at Layer 2) because of the distances traveled. Transport is usually used to connect a local network to somewhere remote, over Ethernet. This may either be a geographically remote campus which is part of the same local network, or a remote router which is used to provide IP transit. The following is an example of using Ethernet transport to connect to remote areas into a single network. Note that there are not routers involved, only switches. The two campuses see each other as a single network. 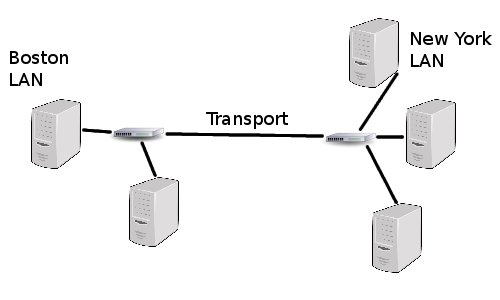 Because transport does not provide routing, it does not provide access to outside networks or the Internet at large. However, transport is often used to reach an IP transit provider. Businesses which need high speed Internet access will often purchase transport to a facility at which an Internet backbone will be located. The transport circuit will be connected to a router that the IP transit provider then uses to route traffic between the Internet and the local network. The following is an example of a local area network using transport to connect to a transit router which then connects to the Internet.

Wiring a business office to be on a single network is usually a fairly simple task. Wiring two different offices in different parts of the country to be on the same network is a lot more involved, and that is when Ethernet transit is purchased.